Acting Your Age: The Impact Of The Pandemic By Generation 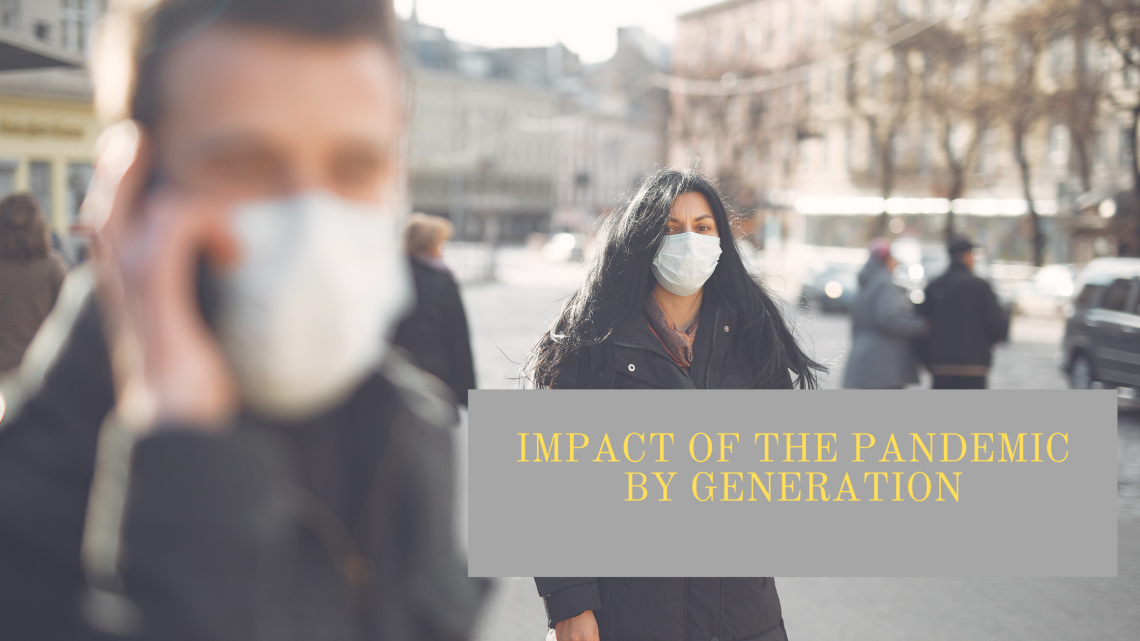 COVID-19 has impacted almost everyone on the planet; that is as incredible as it is irrefutable. Few shared experiences are so truly universal in nature. But it’s also true that how the pandemic affected us varies tremendously. On a national level, the decisions of state actors and individual citizens have had hugely different results in both how the pandemic has impacted lives as well as the rate of actual success in fighting the disease. But even within any individual country, the impact of the pandemic by generation has created stark differences, some of which also impact each group’s ideas about how to recover. While different age groups are anything but monolithic, there are some characteristics of each that no doubt contribute to the range of experiences.

The impact of the pandemic by generation has been different, but always tough.

The Silent Generation. The initial panic about the pandemic was its effect on older people. This group is made up entirely of those over 75 (born 1920 to 1945), and so initially, the sheer disproportionate health risk took over their lives almost immediately. They were advised to retreat to almost total isolation, and for those who lived in assisted living environments, there was huge unease about their safety. They were more likely to be retired, and therefore not economically impacted or working from home. And they also were most likely to no longer have children being homeschooled, though one should not estimate those raising grandchildren as the primary caregiver. For most of them, secondary to physical health concerns were mental issues, especially related to acute loneliness since they were cut off from friends, younger family members, religious services, social activities, and other normal day-to-day life. In the United States, more than 92% of those over aged 65 (which includes some Baby Boomers) are now vaccinated.

Baby Boomers. In some ways, Baby Boomers span the most diverse types of pandemic experiences. Older Baby Boomers, especially those over aged 70, were more likely to face the same challenges as the Silent Generation. But many in this group were likely to be working, and faced sudden remote work environments, or lost their jobs entirely if it was tied to the service or tourism industries. Some of them saw children return from college unexpectedly or had teenagers studying from home. This group is historically considered the least tech-savvy group among current workers, and the least likely to choose to telecommute. But, they are also often decision-makers in the workplace, and this mandatory, total, and sudden shift to fully remote work has challenged their ideas of the traditional office. For some, this is a happy conversion and long-term alternative work setups are more likely than before. For others, this has only further reinforced remote work concerns like productivity and corporate culture.

Generation X. Those who were in their early forties to mid-fifties when the pandemic hit were all of working age. They also were more likely than Boomers to have younger children at home who needed some supervision while doing remote schooling. They also tended to have parents who in the highest risk group and brought parents into their homes from assisted living facilities. Gen Xers are generally considered more technologically fluent than older generations, so their ability to transition to heavy reliance on digital may have been less extreme. But they also were likely to feel all elements of the pandemic, with Silent Generation parents at high risk in the beginning of the pandemic and Gen Z children under 12 who remain unvaccinated. More than half of Gen X women are in their forties – often the peak earning decade for female workers. But women disproportionately reduced their hours or left their jobs entirely as child care centers closed, in-home child assistance became unsafe, and aging parents moved in. For these Gen Xers, the cost of the pandemic may last far longer than the disease.

Millennials. Like Gen X, all members of this group are pre-retirement age and the majority saw at least some shift in their working conditions or a total loss of their livelihood. They were even more likely than Gen Xers to have children still too young to be vaccinated. Since Millennials are considered “digital natives” by many, they were historically already relying heavily on digital resources and open to working from home. That transition may remain permanent given that a large number of Millennials are changing jobs rather than returning to offices when mandated by their employer. For younger Millennials, those that were single, and live far from family might have experienced more isolation as they lost many of their social outlets in addition to the natural interactions of in-office work. Without bars, restaurants, or clubs to congregate in, or families of their own to hunker down with, they risked more mental health challenges than physical ones.

Generation Z. The Gen Z group spans (by some definitions) from the youngest adults, down to just age six. The youngest have gone from being high risk as silent carriers (since many were asymptomatic) to the least protected because they are not yet eligible for vaccination. For the oldest Gen Z, there has been a huge disruption in their personal lives. The vast majority are not yet married, many were in college. Their largest responsibility has been to sacrifice traditional activities to protect passing the disease on to others. This has meant returning home from college, losing essentially all elements of their normal routines. Many have missed proms, graduation ceremonies and other rights of passage. The disruption to their lives has in some ways been the most extreme – complete dislocation from their college lives, or total forced isolation from school, extracurriculars, dating, and other norms. Perhaps combining that with the general emotional fragility of adolescence and early adulthood is why they have struggled most. According to one study, this group has reported the most mental health issues since the onset of the pandemic, with 45% of all Gen Z saying they are suffering (compared to 33% of Gen X and 31% of Millennials).

How do the differences in the impact of the pandemic by generation affect future outlooks?

In a practical sense, different generations are returning to – or building a new version of – the lives they had before the pandemic. But is it really about going back to 2019? Or has the stopgap choices of 2020 segued into the new normal? Well, it depends on who you ask. According to one survey, 55% of Millennials in the U.S. have concerns about returning to work (compared to 45% of Gen X and just 36% of Boomers feeling the same way). But, a UK-based study said that Gen Z and Millennials are much more enthusiastic about returning to work than their older colleagues. In the U.S. there is a huge divide about mask mandates in workplaces and adding COVID-19 to the list of childhood vaccinations required to attend school. While some of these divisions reflect politics and other non-generational factors, surely the impact of the pandemic by generation has created very different views of the future.

Want To Be Part Of The Great Resignation? You May Not Have To Resign Yourself To Anything.
10/01/2022

The Case Of The Changing Emoji: Diversity, Equity, And Inclusion In The Workplace
16/12/2021

What’s College Got To Do With It: Why Companies Are Eliminating Hiring Requirements
22/11/2021

The Support Team: Providing More Empathy In The Workplace
27/10/2021