Leaders Need To Ask What In The World Are We Doing? (Literally.) 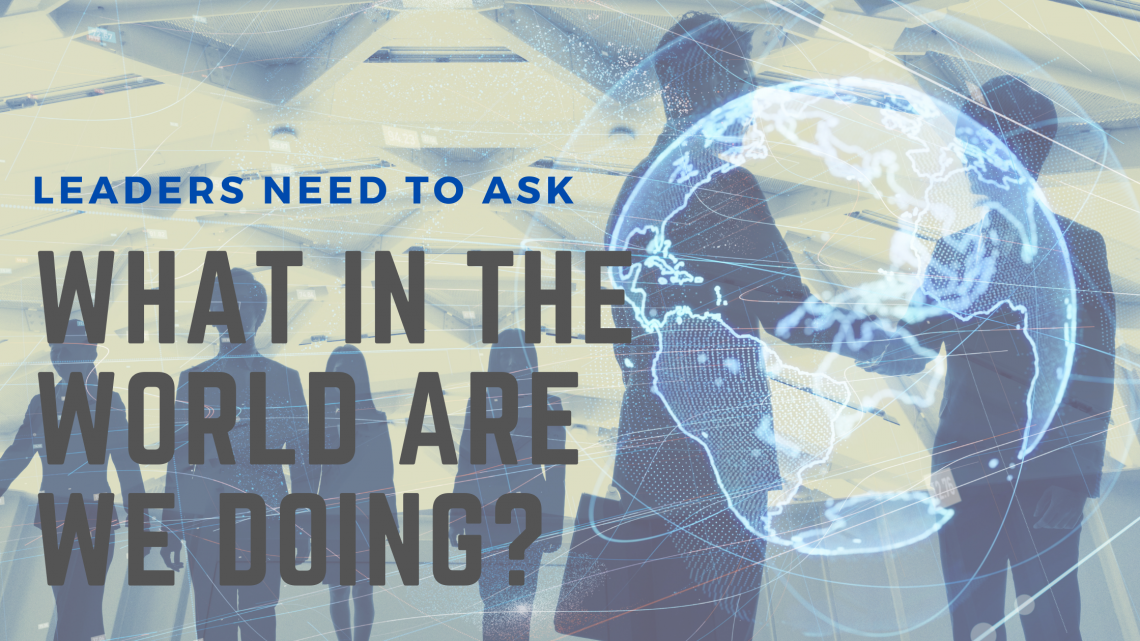 As Russia’s relentless attack on Ukraine continues, major companies continue to exit Russia. Some left almost fully and immediately, while others suspended operations or simply put new investment on hold. Most faced almost certain backlash from their consumers and employees elsewhere if they had stayed. The situation with Ukraine is probably one of the simpler calls for those organisations to make. Note I didn’t say easier: France’s Société Générale announced recently that they are selling their Russian unit Rosbank back to the Russian from the whom they bought it – at one-sixth the original purchase price. That’s estimated to be a 3-billion-euro loss. BP announced a few weeks ago its exit could cost as much as $25 billion USD. And yet, the calculus is simple, if steep. Staying in Russia is too high a public cost, whatever the hit to the balance sheet.

The question that organisations must now ask themselves is ‘what’s next?’.

For those organisations not directly impacted by the Russian invasion, this is hardly the time to breathe a sigh of relief. In fact, those leadership teams should be planning now for when such decisions arrive on their doorstep. I’m not suggesting that there will be another major conflict with a nuclear power and a NATO neighbor that shakes the world the way this one has. But what happens when the public (at least that influential sector of it on social media) start taking a closer look at countries in other regions? I don’t have to name specific locations: let it suffice to say there are places around the word with unstable regimes, human rights violations, intra-country conflicts. Historically (and perhaps unfortunately), those places have stayed below the radar of those not directly connected to them. But it’s possible – if not probable – that is going to change, and sooner rather than later.

A recent article from the Washington Post quoted one expert on the traditional position of organisations: ‘The purpose of a corporation is to produce a superior good or service at a fair price. When you get beyond that into tertiary areas, it affects the primary mission of the business itself because it’s naturally divisive anytime a CEO takes a stand. Inevitably you lose customers, you lose employees, or you anger investors.’

Historically, organisations gave political and social issues a wide berth publicly. It was often inappropriate or unorthodox to even offer personal views on such issues in the boardroom. But social media has changed what the public sees and given it a platform to say what it thinks about it. The inevitability of losing customers, employees or investors is no longer the price a corporation will pay for action in ‘tertiary areas,’ it is the cost of not acting at all.

Assume the social media spotlight is coming to a boardroom near you. Are you ready?

Time ticks faster now. In addition to the public’s changed perception of the role of corporate actors, there is the pace at which companies are required to act. While corporations are historically nimbler than governments, we must remember that individuals are more nimble than organisations. Today the public consumes real time information via social media. Most of

today’s executives are in their fifties and sixties – they learned from their mentors in an era when FedEx was the fastest communication method. But many people who rely on social media today are so young that even email is too slow. In the past, announcements were made to the public via carefully crafted press releases distributed by newspapers (made with actual paper). Now, multinationals who don’t respond to issues within twenty-four hours risk being eviscerated on social media.

Organisations need to be clear on core values and their decision to do business in regions where local actions might not align with those values. An organisation is made of people, and you will not be able to set a policy (and messaging that articulates it) unless you do the hard work of agreeing where you will stand on tough issues. These are the things you should be talking about now at the next offsite. The way most organisations develop senior leadership is about building trust and the ability to communicate. Trust is about predictability: I trust you if I can guess what you’re going to do. You need to all know where each other stands on world events. The uncomfortable topics that were ‘non-business’ issues are now becoming relevant. This won’t be easy: your mentors and predecessors weren’t asked to do this. It’s very new and not the natural state of how leaders and boards approach communication among themselves. But eventually, there will be a crisis meeting and you don’t want to just be figuring it out at that point.

It won’t be another Ukraine. But it will be something.

As an organization in the social media age, leaders need to be reviewing where they operate around the world. As we have seen over the last three to five years, the power of social media has called to task corporate actors in a way that is unprecedented. I’m not saying that any specific upcoming scenario will require a company to withdraw immediately and completely. But we have seen pressure on Coca-Cola to respond to voting laws in Georgia, and Twitter’s decision to delete Donald Trump’s account. Bottom line, companies no longer can make business decisions purely in the context of shareholder value. And the recent decisions by energy companies and other B2B companies mean it’s not just high profile B2C organisations that need to think about this – the social media spotlight is very bright. Learn now, so you can plan collectively and act as a company. Where in the world are we? What in the world are we doing? And what will we say if the light starts shining?

You’re Rethinking Your Business Strategy. But Do You Have The Right Leadership Strategy?
01/09/2022