Twitter Dumped Trump. Is This The New Corporate Political Responsibility? 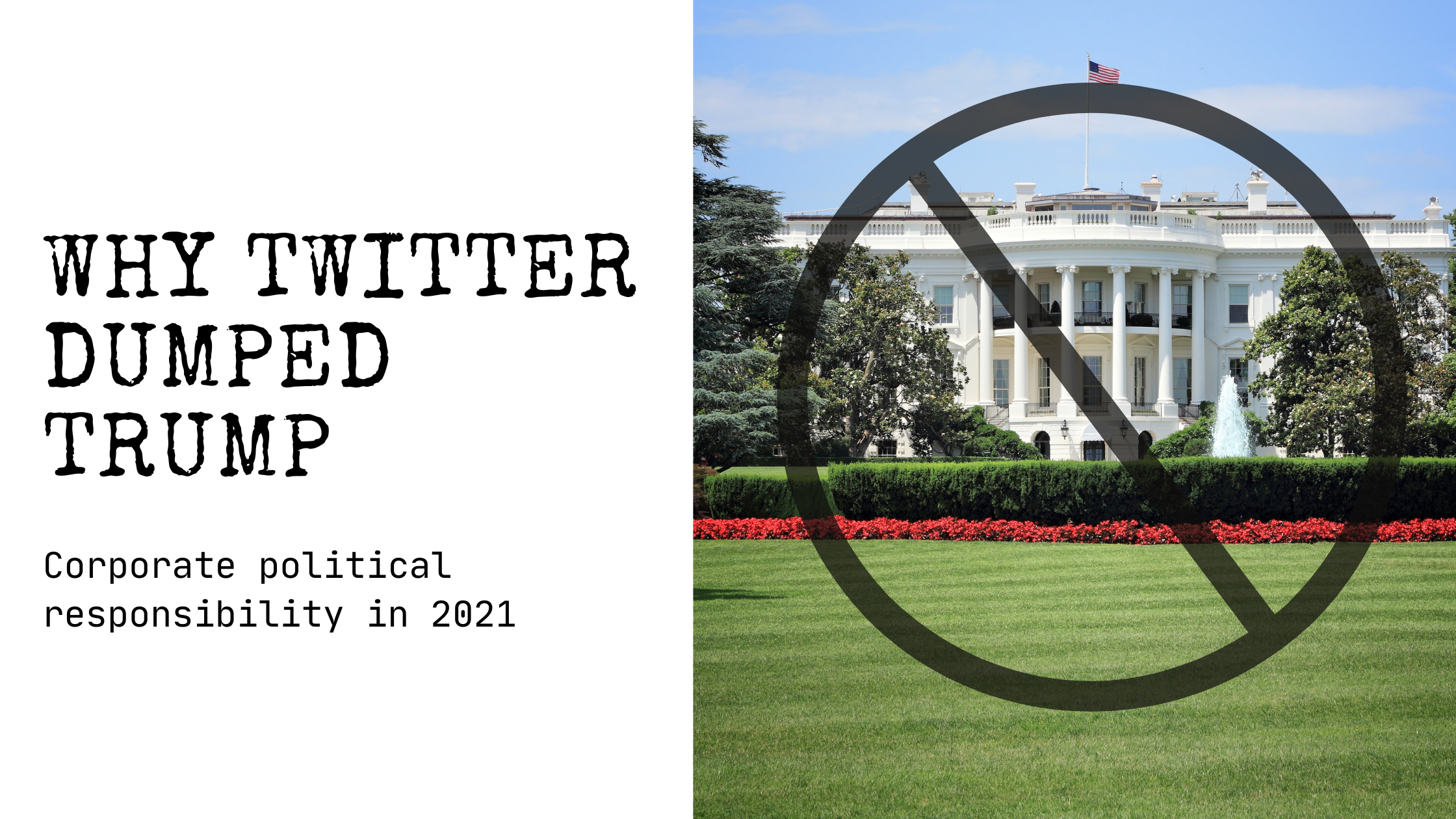 Earlier this month, the world watched an unprecedented attack on the Capitol in Washington, DC. Many – but not all – lay responsibility at the feet of President Trump. Some say it was due to the speech he made shortly before the attack; others say it was also due to tweets he made leading up to it. Twitter has been the president’s preferred way of communicating directly to the public, and he has tweeted thousands of times during his presidency to his more than 80 million followers. But less than a day after the January 6th attack, Twitter suspended Trump’s account. The official statement was they had assessed the tweets to violate their policy; essentially, that the tweets created a risk of violence.

Is corporate political responsibility going to be the newest challenge for business leaders?

Most organisations likely thought the big changes of 2021 were informed by the events of 2020, most notably, the pandemic. Add to that the complex (and overdue) conversations around social justice, and the changes of a new presidency, there was a lot of 2020 to deal with in 2021. It’s almost unimaginable to think that there may already be a 2021 event that will also colour how we think about corporate actions. But Twitter’s decision is worth taking a harder look at and extending that view more broadly to other acts of what we might call corporate political responsibility.

Twitter’s suspension of the president’s personal account, extended to blocking his tweets on the official White House, POTUS and Trump campaign accounts. Their actions mirrored similar deactivation by Facebook and Instagram (which is owned by Facebook). That might seem like a situation most organisations are unlikely to face – social media companies are facing all kinds of extraordinary challenges that most do not. But consider also that Amazon soon afterwards removed the social app Parler from its AWS services. (Parler is an alternative to Twitter that has become increasingly popular with far-right supporters of the president.) In some ways that’s both a more extreme response – to withdraw a product from the market altogether – for a more distanced enablement of the speech. Fifty years ago, it would be like a paper company refusing to supply a newspaper that printed “fake news”. That’s not to say that the 21st century path of accountability is the same, but it’s noteworthy that Amazon made that decision

None of these organisations were facing the traditional pressures that decisionmakers usually contend with: financial conditions, consumer reaction, or shareholder influence. To my knowledge, there have been no reports that a government agency requested their actions, let alone had time to get a court order mandating them. So why engage in that behaviour? Is it the new corporate political responsibility? Do private companies now have the power to silence a head of state? And do they have an obligation to use it, devoid of any impact to them in the traditional corporate definitions? Which is more dangerous – that Twitter might have done nothing, or that it unilaterally can decide to withhold the government’s access to its products?

And then let’s look at the numerous companies that have suspended political contributions to members of Congress who refused to certify the 2020 presidential election. These companies are certainly sufficiently distanced from any consumer, shareholder, or financial pressure, at least in the short term. Companies have for many years openly supported one or both parties, and usually without any serious controversy. Certainly there’s the occasional specific bad actor who is abandoned by corporate donors. But in this case, as abhorrent as it might have been to some, more than 100 members of Congress were within their rights to refuse to certify the election. It’s unlikely that all, if any, will be directly tied to the attack. So these corporate decisions were not borne out of some general counsel’s fear that a private company financed a madman, or that shareholders would revolt. And is the average person really going to change banks because of its political donations to specific Congressional members?

And yet. There’s a new pressure for a certain corporate political responsibility that executives of the largest and most influential companies might soon have to reckon with. If the traditional three lanes business leaders navigate are P&L, consumer reception and shareholder pressure, then add a fourth – the power they have to not just lobby politicians, but silence them. In the case of tech companies in particular, perhaps this is a strategic counterpunch to the increasing calls for more regulation because they are so big. It’s a dangerous game, though, to show you aren’t too big by demonstrating your ability to mute the leader of the free world. Twitter, Facebook and Instagram have no real competitors, and they just proved that — Trump really has been effectively silenced by them. Amazon then cut off one of the few other outlets by pulling the plug on them altogether.

Is 2021 the year of corporate political responsibility?

Many of us would applaud these organisations’ decisions. Regardless of your politics, the division in America has become violent and deadly. The military presence in the nation’s capital is basically an admission that the public sector is aligned with these private actors, in this case. Whether or not the president is ever officially held liable for the attack on the Capitol, it’s safe to say that none of these companies will be penalised for overreaction. To be clear, I’m not saying that any of these companies’ actions are right or wrong. I’m not sure anyone can say that, at least not yet. But the issue is will companies have to wrestle with this in the future? Will 2021 not “just” be normalising the unprecedented changes of 2020 but also facing a new corporate political responsibility? This isn’t a social media issue, or even just a tech one. Marriott and AT&T were among those who suspended political donations to the Congressional members who voted against certification – but arguably they also could have blacklisted them from hotel bookings and cancelled their mobile phone accounts. In fact, Airbnb did cancel all hotel bookings in DC for the week leading up to the inauguration – to avoid responsibility not for the actions of the president or Congress but supporters of them. So it’s time to ask yourself — are you prepared to take on the weight of corporate political responsibility? Welcome to 2021.

Understanding Others: Empathy in the Workplace
29/04/2021

Part Two: From Daydream to Day Job: How People are Turning Side Interests into New Careers
24/03/2021

Part One: The Nature of What We Call Work is Changing. So are Attitudes and Opportunities.
25/02/2021
Leave Comment