Understanding Others: Empathy in the Workplace 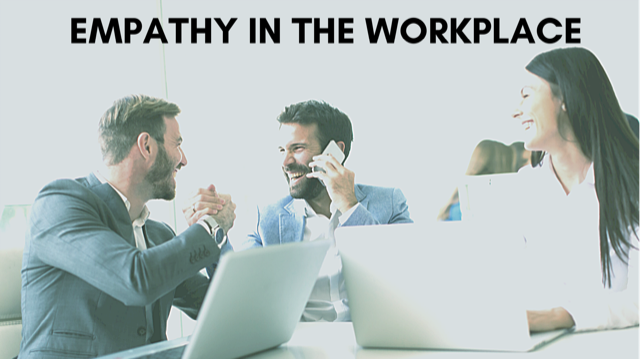 Most of us like to believe that we’re fairly empathetic, in the more casual sense of the word, at least. We all want to think that we can understand, even feel, emotions of others, especially when they are vulnerable or in need. And in our personal relationships most of us feel it vital to both receive that support from others and be able to give it when needed.  However, we don’t as often think of empathy in the workplace as a key skill set. To be clear – it is – it’s just not something we talk about as often in that context. In one study, 82% of CEOs agreed that empathy in the workplace has a positive impact on everything from motivation of employees to business performance.

Why empathy in the workplace is a key skill set.

There are a lot of definitions of empathy, even different types of empathy. It is often distinguished from sympathy, which is a bit more distant type of engagement. Think of sympathy as to feel sorry for someone – when we offer condolences or send a sympathy card for example. We are sorry for their loss, but it is not our loss, and we usually do not try to imagine their pain. Empathy is a much closer emotion and suggests we can feel or have felt the same feeling as another person. Think of sympathy as standing across from someone, looking at them with pity, feeling sadness for them. There’s nothing wrong with that; it can be totally appropriate. Empathy, however, is more like standing shoulder to shoulder with someone, and feeling what they are feeling.

Empathy is a way that we build trust. If I say to you that I have felt the same way you are feeling, or even that I am having that feeling at the same time, you feel less vulnerable. You feel psychologically safer. You’re more willing to trust me because ‘I get it’ (to use a very technical psychological term). We are connected now, emotionally, and that makes us more willing to share other emotions, to take risks around each other. All of that is vitally important at work. How many times have we heard someone in charge say there are no bad ideas? And how many times did we actually believe it? But if teams get to a place where it is ok to make mistakes, or say something not fully thought out, or admit they don’t understand a concept, it is actually a far more efficient way to operate. Think of the amount of time one wastes trying to find answers on their own because they are afraid to ask questions. And last time I talked about management courage and how one of the challenges is being able to speak hard truths. That is so much easier in an environment where there is empathy among team members and between the team and the leader.

Many of today’s senior leaders are Generation X, so a special note about empathy in the workplace to this group. Gen X is more likely to have traditional views about emotion and sharing personal experiences at the office. There are compelling reasons to try to unlearn some of that (and yes, I know that is much easier said than done). For one, your Millennial and Z generation colleagues will likely respect you more, not less, for bringing your whole self to work. They are generally (and people are not sheep, but generally) more open about what is happening in their lives outside of the office and how it might impact work. They don’t want a stoic role model; they want living proof of how does one, actually, balance childcare and parent care and self-care and a big career and all the rest of it? And to know it’s ok when something must be sacrificed. It builds trust. I am a human, and so are you. I have these feelings, and so do you. That might sound really basic. But I dare you to admit at work the next time you are really struggling. You will see just how difficult it is. It’s also healthy for you – because with all due respect to the Baby Boomer generation that were your mentors when you first began your career — they were not leading in the 24/7 digital era of mobile phones, social media, globalised work forces and a warp speed news cycle. The space between work and life has all but collapsed. The time to process your emotions “outside of work” suggests there still is such a thing, really, as outside of work. Think about your tone the last time you sent off the quick work email from home, late at night, after dealing with an annoyed partner or fussy baby, or both. And after a year of COVID, we need empathy from our colleagues now more than ever.

Empathy in the workplace is important. That doesn’t mean it’s easy.

It might be even harder to readily build a sense of empathy in the workplace now because our organisations are more diverse. That workplace diversity is a truly positive and important thing, for all kinds of reasons. There is a reality that come with that, which is that we may have fewer shared experiences. It might sound more artificial to say that you understand how someone feels when you don’t have race, gender, national origin, religion or other in common. And sometimes it will be harder to empathise. That’s not a reason not to. That’s an even stronger argument to find ways to remember that emotions do not engage in identity politics, however you may feel about them. We have been taught not to demonise people, but we risk more often dehumanising people, especially when we don’t readily recognise ourselves in someone else. Building empathy among each other is how we unite and move from ‘them’ to ‘we’. That’s not cheesy or idealistic. That’s how the future of business gets done.

Our Carelessness Is Creating A Crisis: Caregiving Polices In The Workplace
05/07/2021