The Case Of The Changing Emoji: Diversity, Equity, And Inclusion In The Workplace 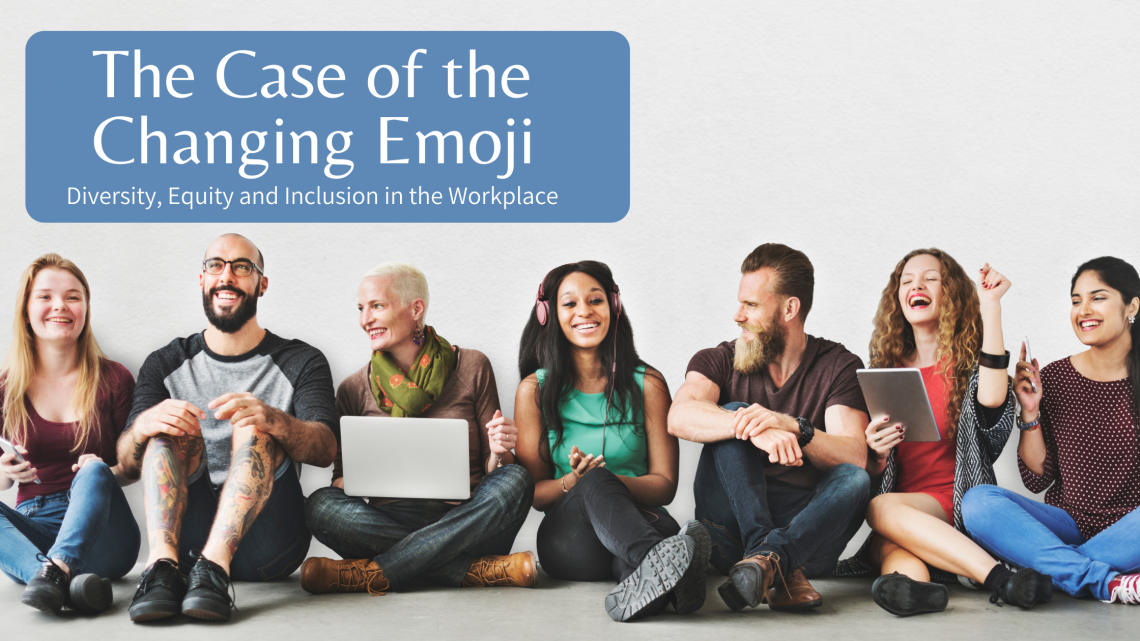 Today’s employers are facing some of the most extraordinary challenges they have seen in decades. Even before the pandemic, the pressures on corporate leaders were more novel and more complex than ever before. Add to that more than 18 months of Covid-19, the related worker-driven movement that is The Great Resignation and a vital but complicated surge in social justice issues — the corporate landscape has become incredibly difficult to navigate. Efforts to meet the call to improve diversity, equity and inclusion (DEI) have become more widespread and higher profile. That’s a good — great, even — thing. And high profile, big-stakes announcements often come under scrutiny when employers fail to meet the moment in a timeline that aligns with those invested in change. That accountability is also fair.

Sweat the small stuff – especially when it comes to diversity, equity, and inclusion

But not all change has to be big and sweeping movements. Sometimes small, consistent efforts towards change can help create an environment in the workplace that fosters DEI, even before (or while) major change takes place. It’s great to commit to hiring a certain number of new employees from underrepresented groups, but that can take months, if not years, to implement. Likewise, it’s brilliant how many major corporations have made real, substantial donations to organisations and charities that support social justice causes. But those donations don’t change the day-to-day circumstances for current employees.

Meanwhile small changes can be simple, quick wins.  These changes are no substitute for bigger change, but they can indicate to the organisation a commitment to certain values and culture in the meantime. And when they come from all levels of team members, it can shift (or sustain) a culture of inclusion, changing the environment, attitude and dialogue while major investments take hold. DEI has real, economic benefits for everyone – but everyone has to help realise the commitment to it.

Things are people, too.  I recently came across a random example of the smallest of statements that indicated an organisation was committed to DEI, but somehow still managed to communicate wider representation and inclusion. I was on a support page of Things, a task management program. I was looking for help on how to integrate my calendar. But when I accidentally mistyped “calendar” in the search box, an error message appeared, with a little icon that looked like this:

A little while later I made another typo (ignore any pattern you’re seeing regarding my typing skills here!) and noticed this:

Now I was curious. I did a few intentional typos (seriously, the next few were on purpose!) and saw that the emoji kept changing gender and color. Now, that’s interesting.

I had two immediate thoughts — first, what a fantastic way to subtly and naturally action inclusion. It requires no context or debate (I hope). It doesn’t force a decision about which kind of person represents the brand. As an act of commitment to inclusion, it’s simple, easily implemented and free. Most importantly, it feels like the sort of thing that might have been initiated not at the top of the organisation, but from a team member in the course of their everyday responsibilities. In fact, I wish I’d reached out to the company to ask them how and when this decision came about, who thought of it, and how much debate there was. But the point is, what I like about it, is that it felt like a natural expression of the company’s culture, integrated into how they operate and communicate that culture with users. Ironically – or maybe intentionally – a company called Things actually communicates a lot about the people who work there.

Context is King (or, Queen). Now as for my second thought, let me be deadly clear — this is not (not, not, not) any sort of substitution for real inclusion of real human beings. In fact, if you do something like this, you better do the hard work of DEI also . . . and well. By no means is “emoji diversity” a real, meaningful change towards diversity, equity and inclusion in the day-to-day experience of your teams, your customers or your suppliers. You have to know where you are in your journey as an organisation. There are actions that are meant to atone, and actions that are signs that you continue to strive for an even better version of the organisation’s current culture.  If you’ve already got robust inclusion in fact, not just words – a truly representative group of decision makers, for example — then this kind of thing is just further exemplification of yy, all about timing.

You also need to be mindful of who drives these sorts of initiatives. I shudder at the idea of someone in the C-suite announcing this – I think that it’s obvious how that would look simply tone deaf and insulting in the worst of ways. But, it would be great if a junior person in the IT department wanted to do something immediate that reflected – on the smallest scale possible – a broader range of communities. That is a moment for someone to both feel empowered and proactive. It rewards contribution generally, and specifically with regard to DEI.

Diversity, equity and inclusion is about empowerment.

You can challenge teams, at all levels, to incorporate attitudes and actions with regards to diversity and inclusion. That creates the kind of environment that might lead someone in the IT department to say, hey, here’s this little thing we could do on the support page. And it is little, so little that perhaps only an eagle-eyed executive management professional with a little too much time on his hands noticed (and probably for sure the only one to go on about it like this). But the companies who reward these initiatives encourage an attitude about DEI that is important to sustained change. The big commitments at the top create the message, but buy-in throughout the organisation is vital to the culture.

Just Give Them The Remote: How To Beat The Great Resignation At Its Own Game
08/03/2022