What’s College Got To Do With It: Why Companies Are Eliminating Hiring Requirements 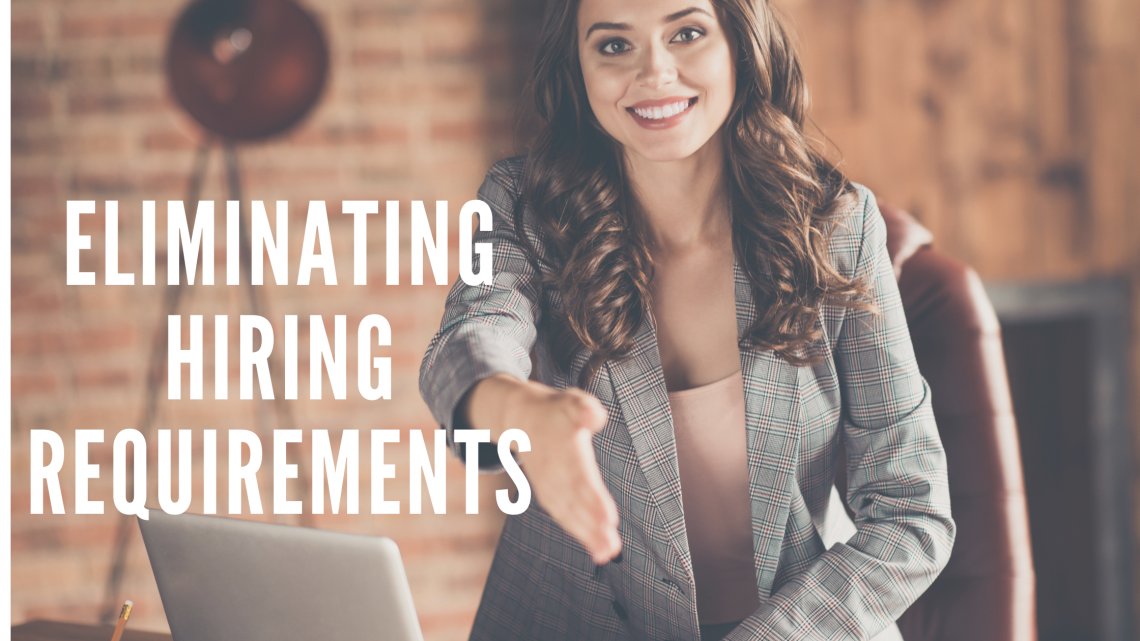 In February 2020, retailer The Body Shop implemented a new hiring practice. Going forward, they would hire entry-level seasonal employees on what was basically a first come, first serve basis. That might sound more like a customer-based strategy rather than a hiring one. But the company now practices what they refer to as “open hiring”. According to the company website, “interested candidates are asked three simple questions to confirm they are eligible and physically able to fulfil the requirements of the role”. If it sounds radical to eliminate hiring requirements like a high school diploma or a successful background check. . . well, welcome to 2021, where The Great Resignation has changed the stakes. Companies are learning new ways to recruit, hire and retain a workforce that has drastically changed the dynamics of who is driving the decision making.

Solving the new(ish) employment problem. Organisations are recognising that in this new era where workers are willing to resign (and resign again and again) they must rethink not just how employees work, but how to get them in the door. The conversations around The Great Resignation have been particularly focused on the correlation with the pandemic and the risks of in-person working. But it’s important to note that The Body Shop had implemented this policy before Covid-19 and the surge in worker departures, especially from in-person jobs. While The Great Resignation is often associated with pandemic-driven changes, employers were seeing hiring constraints before the pandemic. A 2019 survey in the U.S. indicated that nearly 40% of employers who responded were loosening hiring requirements. In other words, organisations who are just now finding solutions are, frankly, a bit late.

How easier hiring could be better hiring. While the pandemic has brought general employment shortages to the front page, the decision to eliminate hiring requirements, beyond the absolute critical skills and legal mandates, is addressing a much older, less publicised dynamic: employment opportunity inequality. There are legal protections in place to prevent overt discrimination in hiring based on race, religion, gender and other protected statuses. But that doesn’t change the inherent inequities when employers have neutral-in-theory employment restrictions that disproportionately impact underrepresented groups, and those challenges have been increasingly the focus of employers trying to not only hire more, but hire better.

The Body Shop’s open hiring model was pioneered by a social enterprise organisation called Greyston Bakery, which provides goods for everyone from Ben & Jerry’s to Unilever. The New York-based company maintains a hiring list from which the next person who is up for an opportunity gets a job. They not only hire without any real screening process, they assist each new employee who needs it with a transition to on-site work including childcare, transportation and other needs. The company ask candidates the following three questions: 1) Are you legally permitted to work in the U.S.? 2) Are you able to stand on your feet for eight hours? 3) Can you lift 50 pounds? No educational minimums, no previous experience, no background check. The decision was made to rethink hiring requirements and just get on with the actual hiring. The goal, in part, was to increase opportunities for people who were more likely to face employment challenges – those with criminal records, with limited educational attainment or even just unable to ace an interview.

All of this isn’t just a feel-good exercise about doing the right thing – it is proving beneficial for companies too. According to this article in Fast Company, “In 2018, the Body Shop’s distribution center saw turnover rates of 38% in November and 43% in December. In 2019, after they began using open hiring, that decreased to 14% in November and 16% in December. The company only had to work with one temp agency instead of three.” As employee loyalty has declined, the costs of turnover continue to be not just a headache, but a considerable financial issue for employers. Ken Frazier, the chairman and former CEO of Merck, joined other CEOs in a commitment to help create 1 million jobs for African-Americans, including his support of expanding the eligibility for those roles that don’t require a college degree. In a recent Wall Street Journal article he stated that “we get many people who are cheaper, they’re just as good, they’re very loyal because this gives them an opportunity”. For many employers facing today’s worker shortage, loyalty might be the most important credential of all.