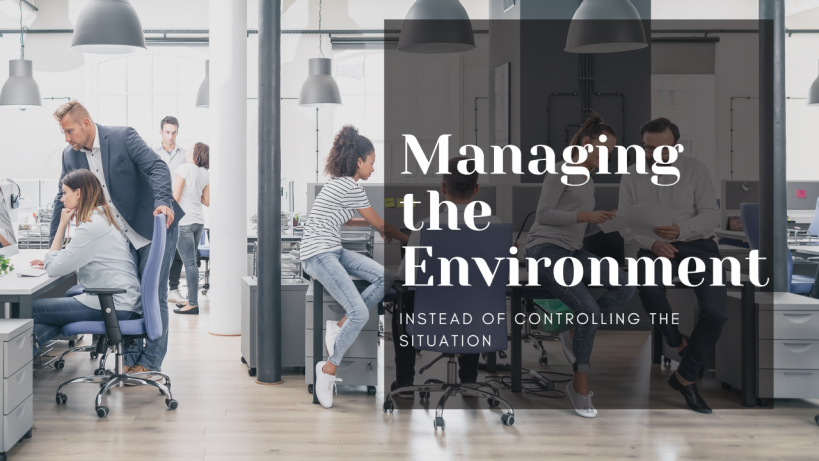 For most of us, when we recount a stressful situation, we emphasise the things that created an emotional response. We’ll not just talk through the substantive areas of a negative work assessment; we’ll mention how it was in the middle of the day, wrecking our focus for the rest of the afternoon. We don’t just explain a team member’s disagreement with us on a specific issue; we’ll describe their tone, or mention who else was in the room. Our primary – or even primal – reaction is how it made us feel. Usually, we feel threatened. On a subconscious level, that leads to a fight or flight response – either of which are really about regaining control. You aren’t going to punch a colleague or flee the room (let’s hope) but your brain is distracted because . . .well, it really, really wants to. In the workplace, executives and other senior leaders will sometimes accommodate this reaction by trying to control the situation. They become preoccupied with how things are happening. But it’s more productive (and more emotionally pleasant) if one can focus on the desired goals and whether they are achieved – what could be described as managing the environment. It isn’t easy – but the more aware you are that you’re hard wired to fight back, the more likely you can let go.

Are you managing the environment or controlling the situation?

Out of control. There have been some reports in the business press about Goldman Sachs CEO David Solomon’s encounter with a junior-level banker from his organisation last year. Reportedly this person was having lunch at the same restaurant as Solomon in the Hamptons — during the workday – and approached him to say hello. Goldman Sachs employees were largely working from home during the pandemic; Solomon has gone on the record repeatedly saying that he does not envision remote work as a long-term solution. According to some accounts, Solomon was incensed by a number of factors, including the age of the banker, the exclusive location and the . . .uh, confidence (?) with which he approached Solomon. Apparently, Solomon has recounted the story numerous times, as an example of why employees must go back to the office. But is it?

Whatever your view on remote work, most agree that there are, in fact, valid reasons for wanting employees back in the office. For example, there’s informal mentoring that happens organically when people are physically together. There’s also impromptu idea sharing, rapid resolution of questions and an acceleration of team building dynamics (for example, you start to read your colleagues’ personalities and work styles better). But a young banker being at lunch during the workday isn’t actually proof that employees need to go back to the office. All it proves is that their movements weren’t being as strictly controlled by their managers as a traditional in-office environment. A recent article came out on the side of the banker, while conceding the merits of in-office work: “Wall Street’s chieftains may have a point about the value of staff gathering in person. It supports a common culture and is essential to training young workers. But the tone of chiefs is too often arrogant and unseemly.” In other words, maybe Solomon had a point. But his tone shifted the focus from valid reasons such as corporate culture or productivity and turned it into a conversation about tone and power.

Guardrails, not guidelines. One way to think about this dynamic is to separate “managing the environment” from “controlling the situation”. If you are a parent of more than one child, it’s likely you’ve already done this at home. You may set general rules for how your children have to treat each other. For example, you may say no hitting, no cursing, no setting things on fire (or whatever). But you may find that you often don’t intervene if your children are simply bickering. You create an environment that puts guardrails around the range of acceptable outcomes. Ideally, your children learn to resolve conflict amongst themselves, but due to those guardrails, they incorporate into those resolutions the values of non-violence and respectful language.

Your colleagues, no matter how young, should not be treated like children (obviously). However, as a leader you should find ways of empowering your team members to have control over situations and decisions that are the mere tools to produce the outcome you want, as long as they reflect the values and mission you establish. This can be more difficult than it sounds, especially if you are a Gen X or Baby Boomer executive. Traditionally, the most experienced person in the room was deferred to on both form and substance, rightly or wrongly. And, for a long time, in-person work was the only option. And therefore mentorship and corporate culture were only experienced in-person. Someone who had been doing the same thing a long time probably was the appropriate authority. But that’s not necessarily true now. In 2021, can you find mentors, resolve problems impromptu and absorb the corporate culture via Slack and Zoom? Unclear if David Solomon really knows. More importantly — Solomon doesn’t need to. The person who actually has the most to lose is the younger employees who don’t go to the office and discover they are missing opportunities or making mistakes because they’re not there in person. If they don’t meet the goals set for them, they are likely to self-correct.

Managing the environment makes you less of a boss and more of a leader.

Combining a philosophy of not trying to control every situation with a focus on objectives that require a lot of crystallised intelligence have two advantages. It can not only help executives better utilise their team’s strengths, but frankly, take some of the emotion out of it. It also shifts a mentality from being the boss (“I dictate where you physically perform your job.”) to being a leader. Your average Gen X or Baby Boomer executive would have grown up (professionally) in a time when their bosses were respected partly out of fear. As one (Gen X) Bloomberg reporter opined about the Solomon incident “If you are a midlevel investment banker . . . hav[ing]a long leisurely lunch at a Hamptons restaurant, and you see the chief executive officer of your bank sitting two tables away, what is the move? My instinct is definitely along the lines of ‘put on a hat and sunglasses, scuttle to the bathroom with your head down, climb out the window, catch the next helicopter back to the office and never eat lunch again,’” Controlling the situation might scare people into compliance – but as Robert wrote recently, now is a time when leaders can improve their organisation, not be held hostage to it. But this also isn’t about giving in – it’s about being more self-aware and finding productive ways to get the outcomes you want at work. Wherever “at work” might be.