Major Companies Had To Leave Russia. The Road Back Might Be Longer Than It Looks. 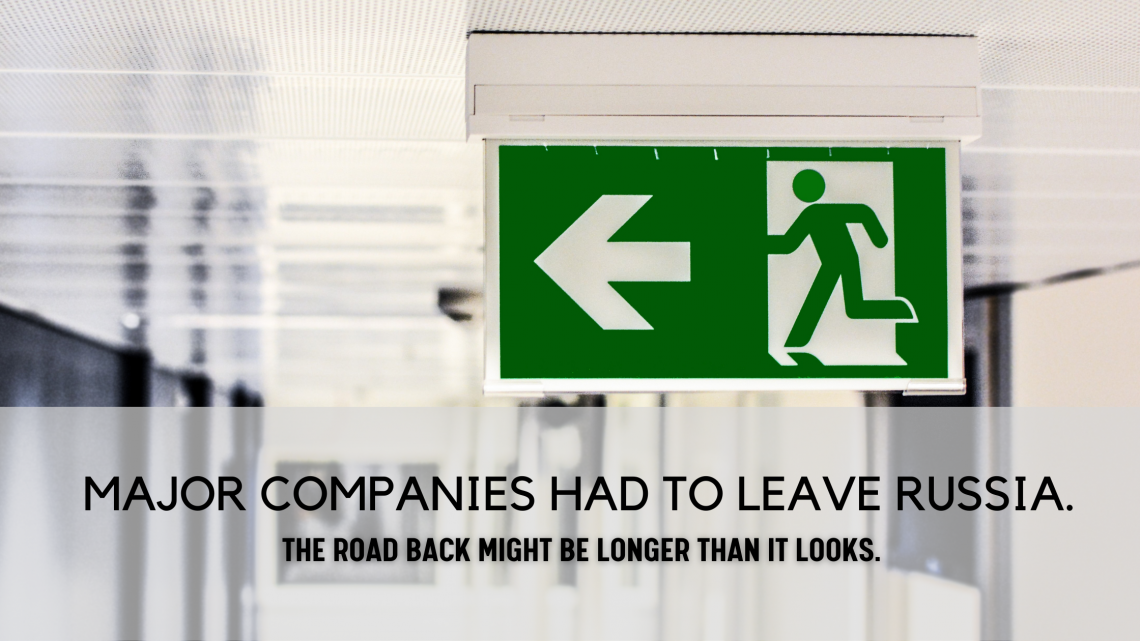 Vietnam was the first war Americans saw on the nightly news. It changed the way Americans – who have not fought on their own soil for more than a hundred years – understood the true toll and terror of combat. The images and reporting came in through the nightly news (three networks) and a handful of newspaper outlets and agencies like the Associated Press. Compared to today, that was a limited and controlled amount of information. And yet it played a significant role in the eventual public outcry against the war, putting pressure on the US government to withdraw from the conflict.

Fast forward to today, and we are watching the war in Ukraine in near real time, through a vast variety of sources and media. It’s what Thomas Friedman at The New York Times is calling ‘World War Wired’. The widespread public outcry of individual citizens is focused on corporations, not just governments, and has led to a relatively prompt exodus of hundreds of foreign companies from Russia. But this is new: we have not seen public pressure from individuals show this sort of private activism, or have companies react so swiftly. Hundreds have left.

Companies had to leave Russia because the public said so. That’s new.

But that doesn’t mean that C-suites and boards of the companies impacted were prepared on how to act or when. The Washington Post reported that dozens of CEOs consulted with Professor Jeffrey Sonnenfeld of Yale University in the days following the initial invasion. Sonnenfeld was advising the group on how to exit – literally walking these organizations through what leaving looks like when done on the public stage. After all, it’s not as straightforward as turning off the lights and closing the door. There are everyday Russian citizens who rely on these companies for those jobs. Some of these companies provide essentials such as pharmaceuticals and baby formula. And the hard calculus is that for some of these organisations withdrawing impacts decades of investment and millions of dollars in assets and revenue under consideration. Sonnenfeld now maintains a public list on the companies who have withdrawn. But what is also interesting is that he categorizes how much they have withdrawn. For example, he gives a ranking of D, and calls it “buying time” if the organisation has suspended only a small part of their operations or announced they will not commence additional investment or operation.

Many high-profile organisations that are well known to the average consumer, like American Express and Marks & Spencer, have a grade of B – they have essentially suspended all operations. But one could equate this still to dimming the lights. We can assume they still have leases, or factories, or other assets. That’s realistic – after all, it’s nearly impossible to truly pull the plug overnight. But this could also indicate that many anticipate returning – and probably more quietly than they left. But can they?

Companies had to leave Russia fast, which probably wasn’t easy. Going back will be much harder.

In addition to the power of social media and public pressure generally, we’re in the midst of a Great Resignation where employees are choosing where they want to work based on their values, not just their finances. If these companies try to return before the public thinks they should, they might find it difficult to keep employees in other jurisdictions. This new challenge will be yet another undertaking no mentor of theirs ever faced, and no business school class could fully prepare them for.

This is particularly tricky if Putin remains in power. At some point, the war will end. The circumstances under which it concludes will obviously colour public perception. And it will matter, most likely, to employees and consumers of McDonald’s, Coca-Cola and Apple in the UK, US and Japan if and when those companies return to Russia. The world has changed and what is local, is now global. Companies won’t be making these decisions alone in a board room. They’ll do it on the social media world stage. And when that audience approves of this decision will be difficult to anticipate.

The public was united that companies had to leave Russia. What about the return?

The invasion was a specific point in time. It was sudden and violent and unequivocal. And so, all these companies had a grim, but shared, cover of urgency around the decision to pull out. Even then they did it with consultation among each other and with an external expert. But re-entry will be difficult, and individual. The end of war is rarely as identifiable as the start. Knowing just how much devastation Putin has inflicted will not be known for years. So when does it become appropriate to re-enter? The toughest question of all, I suspect, is when does the public say you can? How will you know? A recent poll stated that 75% of Americans wanted companies to cut ties with Russia. That was in early March – one can only imagine how the public will feel the longer this war goes.

There is an argument, of course, that memories are short. That the same constant access to information that made this war so real and so close will also push it down sooner than it should be. Maybe. The truth is, we just don’t know when companies can go back to Russia. But we will let them know.